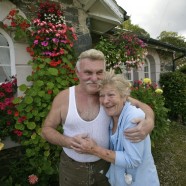 The truly amazing Bobby and Liz

Posted by Duncan Raban on February 27, 2016 in Fab Oldies | Leave a comment

I was sitting in Victor the Volvo outside Ormond Street Hospital and I was reading Classic Car Weekly looking at Volvos 240 GL. I love these Volvos and I am always looking out to see if any owner wants to sell their model.

I saw this Volvo for sale, it was a one owner 1988 Volvo estate, the trendy GLT version in grey metallic with tan leather. So, I called the number and a deep Scottish voice answered the phone. It was then when I discovered this Volvo was living alone on a farm 50 miles from Glasgow, literally in the middle of nowhere.

However, the car sounded fabulous so next morning at 5 AM I was at Heathrow Airport to fly to Glasgow to go and see this Volvo that was for sale. 3 hours later, I was on a remote farm with Donald the farmer and one hour after, I was driving this wonderful Volvo back to London.

Well, that was until I saw a sign for the famous Loch Lomond. It was now 11 AM and I was, by now, driving this lovely car, which I named Valentino simply because he was so smooth. Unlike Victor the Volvo, this one was rather sleek,  in a fabulous grey metallic with sexy tamed leather seats, electric sunroof, and sport wheels. Being an estate, he was super cool to look at which is why I named him after the Italian designer Valentino.

It was a beautiful sunny September day so I decided to tale a quick detour to see the loch. Little did I know that this detour would become 8 days of driving around Scotland on my own meeting the most incredible people.

Soon, I was driving along the side of Loch Lomond which was so stunning to look at, like a mirror shining up to a blue sky.

A sign saying “LUSS – 1/4 mile” led me to a thin road along the shore and within 400 metres I saw something so beautiful I just had to stop. My jaw was hanging open at such beauty and colour. Here I was looking at a tiny Victorian cottage surrounded in magnificent coloured flowers. It was bathing in the September sunshine and overlooking the mirror calmness of Loch Lomond. This gorgeous garden was on a slope surrounded by Victorian railings. It was like an oasis from a magical fairy tale.

I opened the boot of Valentino the Volvo, took out my camera and began to shoot the house and its surroundings.

I noticed a little wooden train made from beer barrels, but I could not get quite close enough to capture the beauty.

I then started thinking if it would be better to just knock on the door and see who lives in such a marvelous place. Just moments later, I was around the back of the cottage knocking on the backside door.

To my surprise, a man holding a mug opened the door. He looked bemused as a deep Scottish voice came from under his moustache:

‘Oh, I just wanted to tell you that you set my heart alight.’

5 minutes later, I was sitting in Bobby Burns’ lounge with his wife Liz, a mug of tea and a some scones she had just baked. We all shared stories from our lives and they were so kind to tell me how they’ve met and go on to tell me about the depth of love between the two of them.

Bobby Burns was wearing a toupée. He fought stomach cancer for 6 years and won so, now he is finally on the mend and was looking forward to many years together with his lovely wife in their amazing house and garden. However, with tears in his eyes, Bob shared that now his wife, Liz, is struggling with the terrible illness as well.

But we went on to talk about happier things. I found out that Bobby spent his whole life making barrels. He is now retired, but he was unable to let his passion behind. So, he built the wonderful train full of flowers in his garden with barrels he made himself. I just thought “What creativity this man had. For me he is the van Gogh of gardening.”

It was by now midday and I remembered that just 6 hours ago I was in London, at Heathrow. Now I was with these delectable people near loch Lomond. Life is so delightful if you just take an interest in real people and show them that you care about who they are.

I told them that the time has come for what I call a “love photo”. Liz giggle and asked:

I took her hand and said:

‘Come on, Liz. Let’s go into the garden and you can kiss Sir Bobby all over his sexy vest.”

I got them hugging and kissing and got these wonderful pictures.

I also got Bobby to christen Valentino for his first bonnet shot ever.

Soon after that, I jumped into Valentino and waved goodbye to this wonderfuly-sensational couple, Bobby and Liz.

Sadly, I found out that not long after my visit, Liz had passed away and gone to heaven. I regret not taking more pictures of Bobby and Liz together.

I have to emphasise here  how so so important it really is to photograph in a candid style  the people you love TODAY, not tomorrow. Especially your grandparents or any older friend or relationI think it is so valuable to capture as many moments as you can, especially if your loved ones are a long time married couple try to photograph them hugging tight together as people are rarely photographed  in love like this, really hugging each other. These candid style pictures become so precious like magical  time capsules of love and will be treasured for future  generations to enjoy. Yes our elders truly are fabulous oldies like Bobby and gorgeous loveable Liz.  God bless them both.